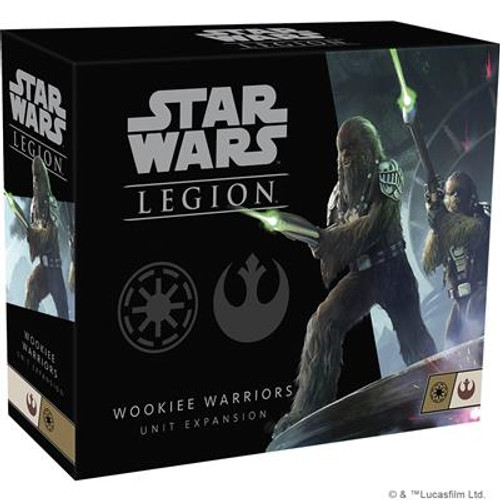 Add a formidable unit of powerful Wookiees to your Star Wars: Legion armies with the Wookiee Warriors Unit Expansion! This tall and commanding species boasts nearly unrivaled physical strength and ferocity, and now both the Galactic Republic and Rebel Alliance can make use of their formidable skills.

The Wookiee Warriors Unit Expansion puts six Wookiee Warrior miniatures that can be assembled and used in a variety of ways at your command, including as either a close-range unit carrying ryyk blades and Kashyyk pistols or a unit of Wookiee sharpshooters firing X1 Carbines. No matter how you assemble your miniatures, four upgrade cards invite you to field these units for both the Republic and Rebel factions. Additionally, a miniature representing a Wookiee Chieftain can enter the fight as a Republic commander and a fifth unit card and three command cards let them further influence your strategy. Finally, eight upgrade cards invite you to customize your units with Wookiees carrying an array of weaponry.

The Galactic Empire encompasses countless star systems, ruling over the galaxy with an iron fist and sitting at its head is Emperor Palpatine. As the ultimate ruler of the Empire, all bow before him,...

Despite their imposing size, Wookiees are normally peaceful and proud. After years of suffering under Imperial rule, however, many Wookiees have taken to the battlefields of the Galactic Civil War as...

The Imperial All Terrain Scout Transport is a formidable war machine, cutting through Rebel lines as it stomps across the battlefields of the Galactic Civil War. Despite their appearance, however,...

Armies are more than just soldiers. To wage an effective war across the countless battlefields of the Galactic Civil War, the Galactic Empire needs recruits who can do more than fight.  This...

This official Dungeons & Dragons set of Marvellous Pigments will offer you a perfect palette to painting the many and varied monsters from the Monster Manual and it comes with a free, and...

A battle for life and death on the high Lucidian seas! In the tactical game Uk'otoa, factions of sailors vie to be the last claimed by the raging sea leviathan Uk'otoa. As the ship slowly falls...

Candlekeep attracts scholars like a flame attracts moths. Historians, sages, and others who crave knowledge flock to this library fortress to peruse its vast collection of books, scribbled into which...

Despite their imposing size, Wookiees are normally peaceful and proud. After years of suffering under Imperial rule, however, many Wookiees have taken to the battlefields of the Galactic Civil War as...