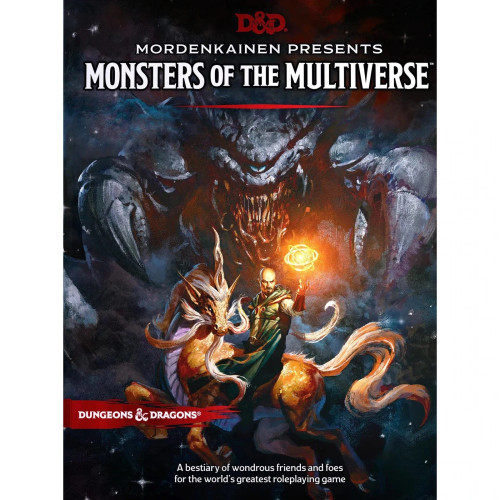 Sparkling with the musings of the wizard Mordenkainen, this tome features a host of creatures for use in the Dungeons & Dragons roleplaying game. Hailing from every corner of the multiverse, these creatures represent some of the most benevolent and malevolent forces that D&D heroes might face.

The book also gathers together fantastical peoples from many different worlds. Each of these peoples represents a race option when you create your D&D character, expanding on the choices in the Player’s Handbook.

Compiling and updating monsters that originally appeared in Volo’s Guide to Monsters and Mordenkainen’s Tome of Foes, this book presents friends and foes for any D&D campaign, many of them accompanied by the comments of Mordenkainen. The wizard has faced many of these monsters and peoples on numerous wondrous adventures. Now it’s time for you to venture forth and face these creatures yourself!

D&D has partnered with Adult Swim to bring this boxed set blending the world of Dungeons & Dragons with the mad narcissistic genius of Rick Sanchez’s power-gaming sensibilities, and it...

Add these awesome Magic item cards to your inventory to keep track of items of your, or your players characters

These 182 durable, laminated cards represent any non-player characters (NPCs) your players might meet during your next D&D game. From a bandit captain's saving throws to a giant spider's stealth...

RPG: Monster of the Week

D&D Icons of the Realms

D&D Icons of the Realms

D&D Icons of the Realms: Eberron: Rising From the Last War features a number of exciting races and monsters from Eberron for players to add to their collections. Enter Eberron, a war-torn world...